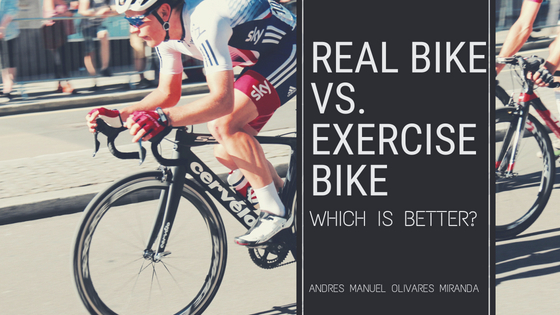 Biking is becoming a popular form of exercising for anyone looking to burn calories quickly, help with weight-loss goals, or just get into better shape. The choice of exercise bike versus real bike is a common debate between fitness experts. They each have their pros and cons, but which one is better for your own personal workout?

Exercise bike
Safety and convenience are the two main reasons people choose a exercise bike over a real bike. A rider can pedal for miles and miles indoors and never have to worry about the inconveniences of riding outside. Exercise bikes also allow riders the chance to spin at a higher RPM while staying in place. An exercise bike allows the rider to control the speed and change the resistance to simulate climbing hills.

Exercise bikes allow a rider to ride rain or shine at any point in the day which can prompt someone to exercise more often. With the advancements in technology, stationary bikes by companies like Peloton allow riders to take spin classes, watch tv or follow the virtual trail the rider is on.

Real bike
For some, riding indoors isn’t for them and prefer to take their bike riding outdoors. A real bike will give a rider a better workout because their body is pushing against wind resistance. The riding surface also plays into the workout as well. The smoothness of a paved trail allows for quicker speeds and increased calorie burning while uneven roads give the riders muscles a better workout.

Riding outdoors also allows the rider to use the bike for exercise but it also becomes a form of transportation. A bike can be rode for exercise, to work or to run errands.

While riding a bike burns calories quicker, this type of exercising is easier to take short cuts on. Riders can coast down hills and on crowded paths they ride at a decreased speed or even stopping for pedestrians which decreases the riders pace.

While each bike has its perks and its cons, there can be no real winner between the two different bikes. The final decision for bike choice comes down purely to personal preference. Picking the right bike could lead to the best workout a rider has ever had!